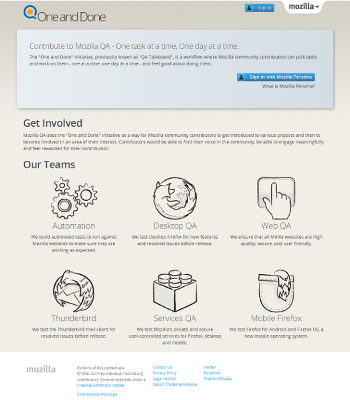 The Mozilla Quality Assurance (QA) team is happy to announce the release of One and Done, a way for Mozilla community contributors to get introduced to various projects and then to become involved in an area of their interest. Contributors would be able to find their voice in the community, be able to engage meaningfully, and feel rewarded for their contribution. This release represents the first-ever milestone of One and Done and has been possible thanks to the hard work of a number of teams within Mozilla as well as community contributors.

One and Done is Mozilla QA’s way to enable community members to make their contribution such that they can work on tasks one at a time, one day at a time, and feel good about doing them. Over the last 18 months, Mozilla QA has held several brainstorming sessions with community contributors as to what such a Taskboard should look like. In October 2013, we scoped out a well-defined chunk of work, named Version 1 Milestone 1, and made a call for participation to the community.

Many thanks to community members Sasha Kruglov, Ashish Namdev and Soumya Kanti Chakraborty for contributing to the project’s Github repository. Thanks are also due to Mozilla’s Web Development team, especially Michael Kelly and Schalk Neethling in bringing the project to life.

By December 20, 2013 the essential development work had come to an end. In the first quarter of 2014, the Security Assurance team at Mozilla performed a security review of the code, and found the code base free of data privacy and security issues. Then the DevOps team at Mozilla helped to push the code first to a staging instance and then to production, complete with support for metrics and tracking in Bugzilla. At the same time, members of the QA team came up with tasks that community members would perhaps like to do in order to support Mozilla’s broader goals and also further their own interests. Thanks to community member Gabriela Montagu for reviewing the tasks before we went live with them.

This release is just the first step in a long journey. Based on your feedback, we would love to start development on the next milestone for One and Done. We are lucky to now have Bob Silverberg as a dedicated developer on this project.

About One and Done