WebFWD is a  three-month business creation program  for startups around the world. It is a Mozilla project consisting of weekly training sessions & exercises, office hours with industry experts, ongoing coaching and guidance from the world’s best technologists.

Our community in Cluj Napoca , Romania, organized an event on November 5th, 2012 to help spread the news about the new class enrollements and also about Mozilla Community. Diane Bisgeier , program manager for WebFWD and Scout Brian King (who is our newly Europe Community Manager ) attended  Open Web, Open Business, an event produced by the local Mozilla Rep team.

The event started with Brian’s talk about open web initiatives, focusing on HTML5 and Firefox OS. Shortly after, Diane presented the program and how this complements with its offerings of business teachings, tools and resources to enable developers to build not just products but full-blown businesses on the open web.  The second part of the event consisted in a panel of local entrepreneurs from all different domains that are Open Source enthusiastics. They answered to the audience’s questions and gave advices to all interested in open source startups.

The event got media’s attentions and Diane and Brian were invited to join a  TV News show the second morning. The video has Romanian translations over it, but you can hear their interview behind. 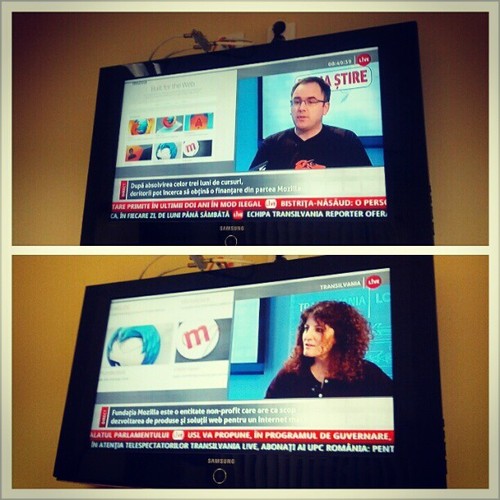 Was a pleasure to see people interested in build up new open source opportunities and also contributing to Mozilla. Thank you all for being part of an awesome event. Here are a part of the participants: