I’ve been going over my Q4’2010 goals recently to identify my accomplishments and failures.  Basically, I’m trying to answer that million dollar question, “Where does the time go?”  I believe I’ve stumbled upon the answer to that question (or at least a hint to that answer).

Since I started using a self-created project manager via Google Spreadsheet, I’ve been able to collect some very useful data about goal and time management.  Capturing and visualizing this data has enabled me to identify two primary errors in judgement which doomed my goals to failure before I even started:

Speaking to the 1st, not accounting for loss-of-time, is, quite simply, a failure of foresight.  Thankfully, hindsight comes a lot easier to me than foresight.  Lesson learned.  I’m now armed with the tools, experience, and data to more accurately project actual work-hours.

Speaking to the 2nd, my Q4 goals were far more specific than previous quarters.  In the past my goals were far too vague.  It was my belief that a contributing factor to the failure of my goals was their lack of definition.  Unfortunately, I over-corrected on this point.  My goals were so well defined that there was no flexibility.  This approach essentially eroded any grey area between success and failure.  While this can be a good thing in the beginning (it paints a very clear picture of where you want to go), it definitely works against you come crunch-time.  The art comes from striking a balance between the two extremes.

In an effort to come closer to that balance, I’ve created some charts.  These help visualize the data and tell the story of my successes and failures.

This first chart shows my original projections for time allotment vs the actual time spent.  Going into Q4, I knew I wanted to spend more time on automation and equal time on desktop and services1.  As it turns out, the actual time (averaged over the 12 weeks of the quarter) was weighted more heavily toward desktop.  I think this speaks more to the demands of the various teams I assist than to the ability to prioritize and manage my time.  As a result, I plan to adjust my goals based on the demands of the team and less toward personal priorities.  In other words, focus my efforts on where I am needed most. 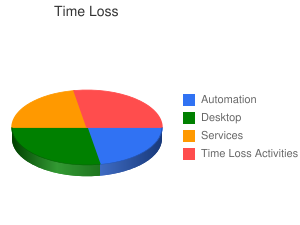 The second chart shows how much time time-loss activities take away from an average work week.  The way it breaks down, I’m losing a complete day of work per week due to meetings and administration (ie. filling out status reports, checking emails, etc).  Once I factor in away time (holidays, lunch breaks, appointments, etc), a 40 hour work week is quickly whittled down to 22 hours of actual time for work.  I’ll definitely have to keep this in mind when setting goals in the future.  Setting goals based on the assumption that a 40-hour work week provides 40-hours of actual work is folly.

The final chart shows the result of my mistakes.  While I was able to hit nearly all of my desktop goals, I only hit half of my automation goals; and worse still, a third of my services goals. I think this is just a reflection of the importance and the art of setting goals.

Now, if I correlate all of this information, I can begin to make some interesting observations:

These correlations are interesting because it shows that in all areas, the time needed to accomplish what I am asking myself to do is not nearly enough.  In other words, I need to cut back on my goals.  Now this does not mean that I will be cutting back on my commitments to existing projects going forward.  What this means is that I will be adopting a progress-oriented approach to my goals going into Q1’2011.  My plan is to set realistic target milestones which result in value being added to my various projects (stay tuned for these in the next couple of days).

I appreciate everyones help and feedback throughout the quarter.  I look forward to a much more productive quarter in this new year and to the release of Firefox 4.

I am a Quality Engineer at Mozilla, currently focused on improving Graphics quality. I'm also the project manager for the Testdays program. I currently reside in Vancouver but grew up just north of Toronto. I enjoy hiking and photography in my spare time.